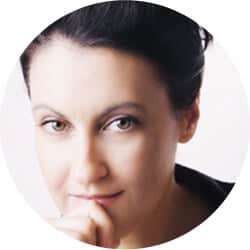 Spanish Premier Mariano Rajoy is about to suspend Catalonia’s autonomy, and EU leaders have ruled out involvement in the crisis, with the justification that the Spanish government is acting to “restore the constitutional order”. There seems to be a consensus among the European leadership that Madrid’s handling of the 1 October Catalan referendum is completely in line with the Rule of Law.

“Just spoke to @MarianoRajoy. Sharing his constitutional arguments, I appealed for finding ways to avoid further escalation and use of force” – so tweeted Donald Tusk, President of the European Council, on October 2nd – a day after the Spanish police had violently tried to prevent Catalan citizens from voting in a referendum on independence. A plenary debate on the events in Catalonia shortly took place at the European Parliament, at which the European Commission re-stated its position that “under the Spanish Constitution, Sunday’s vote in Catalonia was not legal,” that it “was not within the remit of the Rule of Law” (in a speech by Commission vice-president Frans Timmermans who is in charge of matters of the rule of law and the Charter of Fundamental Rights). During the debates, no member of Parliament contested the illegality of the referendum – given that the Spanish Constitutional Tribunal had pronounced it so in its judgment of September 6th, suspending the Catalan laws on the organisation of the referendum. On October 5th, the Tribunal suspended the session of the Catalan Parliament scheduled for the 9th, on the grounds that the assembly might announce Catalonia’s secession. European Commission President Juncker has reiterated that this is a Spanish internal matter that must be dealt with in line with the constitutional order of Spain.

This legalistic and sovereignist interpretation of the ‘rule of law’ that seems to be now shared by the political leadership of the European Union is alarming.

The Spanish Constitution, in its Article 2, proclaims “the indissoluble unity of the Spanish Nation”. This makes secession illegal. But this clause only provides the legal grounds for the government to invalidate the Catalan authorities’ decision for secession, once it is taken. In this sense, the Tribunal had grounds to strike down the provision in the referendum law stating that a Yes vote would trigger an immediate unilateral declaration of independence.

However, the actions of the government in banning altogether the referendum and the session of the Catalan Parliament cannot be justified by any of the Constitutions’ provisions. Such actions are in violation of the right to peaceful assembly and the freedom of speech – two principles embodied by referendums and parliamentary deliberations. These rights are protected by Articles 10 and 11 of the European Convention on Human Rights, by Articles 19 and 20 of the Universal Declaration of Human Rights, by Article 2 of the basic law of the EU (Lisbon Treaty), as well as the Charter of Fundamental Rights of the European Union and the Spanish Constitution. The violation of basic rights and freedoms protected by international and EU law cannot be an internal affair of any government.

So far, the European Union has zealously upheld this principle, most recently in its efforts to counter the Polish government’s attempts to undermine the independence of judges and the Hungarian government’s crackdown on education and foreign-backed civil society. Today, however, the Europeans Union’s leadership is condoning the violation of basic rights by the Spanish government and emphatically defending this as a matter of safeguarding the Rule of Law. It is worth, therefore, to scrutinise this misinterpretation of the ‘rule of law’ concept that risks to be mainstreamed into a new political common-sense in Europe.

The violation of the right to peaceful assembly and the right to free speech in Catalonia has been given the appearance of legality because the government’s actions were based on rulings of the Spanish Constitutional Tribunal. As I noted, these rulings infringe EU and international law, as well as the Spanish Constitution – therefore the international community should be rebuking these judgments and the ensuing actions of the Spanish government.

There is, however, a more fundamental argument. Mr Rajoy’s government and the European leadership seem to be reducing the rule-of-law principle that lays the foundation of liberal democracies to the rule-by-law principle that has empowered many dictatorships. The notion of rule-of-law has its roots in the Natural Law doctrine, according to which the source of basic rights and freedoms is human nature, not a document (be it a Constitution), nor a human agent (be it a Parliament or a democratically elected leader). A constitutional codification might help protect those rights (not always, as we’ve just seen), but their existence is not predicated on a written document, on a judicial ruling or a political decision. By force of their being universal and unconditional, these rights have superiority over any legal provision. That is why such rights are respected in the United Kingdom even in the absence of a written constitution. Another element in the rule-of-law doctrine (in contrast to rule-by-law) is that political rule is based on the consent of the governed. The recent referendum in Catalonia was meant to assess this consent, just like the 2014 referendum in Scotland confirmed the enduring consent of the Scottish to be subjects of the British crown.

Moreover, the Spanish Constitution makes a mockery of the Rule of Law by equating it to the will of the people, as it pledges to “consolidate a State of Law which ensures the rule of law as the expression of the popular will.” The ‘popular will’ is the source of sovereignty in a democracy. The ‘rule of law’ guards individuals from the abuse of power by any power, including that of the ‘popular will’. Sourcing the rule of law from the will of the people, as does the Spanish Constitution, provides a legal basis for a dictatorship: as we Europeans know only too well, all our great dictators claimed to speak with the voice of the people.

No, Europe is not about to fall into the abyss of Despotism, but it has taken a careless step down that slippery slope. Preventing the downgrading of the rule-of-law into a despotic rule-by-law is the business of every European citizen.

Zygmunt Bauman was a towering intellectual who saw and analysed – right up to his death in early 2017 – the great socio-political changes, often convulsive, in modern western society long before his peers. Here we highlight his prescient insights into what he dubbed ‘liquid modernity’ with 24 chapters on topics ranging from online loneliness via precarity/poverty/inequality to migration, fear of the ‘Other’ and the decline of the nation state. Chronicle of Crisis, 2011-16, written by one of the great chroniclers of our times, will be read and re-read for decades and more to come. 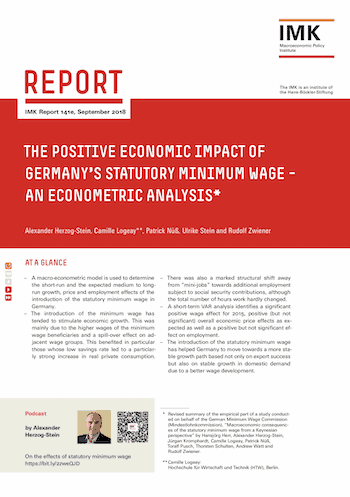 With the empirical analyses of the macroeconomic effects of the introduction of the statutory minimum wage in Germany, the IMK tries to determine the short-term and expected medium- to long-term growth, price and employment effects with the help of a macro-econometric model. As a result, economic growth tended to be stimulated by the introduction of the minimum wage. This was mainly due to the higher wages of the minimum wage beneficiaries and a spillover effect on adjoining wage groups. In particular, this benefited people whose low savings rate led to a particularly strong increase in real private consumption. The price increases triggered were negligible on a macroeconomic scale. 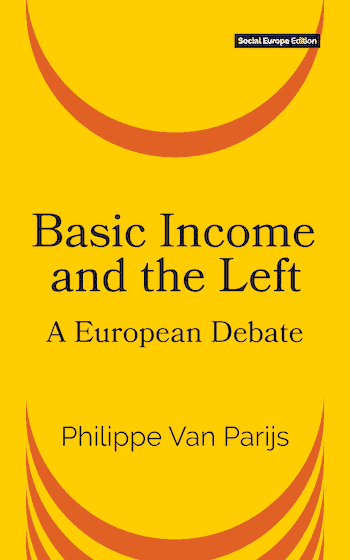 Is an unconditional basic income without means-test or work-test compatible with social justice and individual self-worth? Does it open up the space for an end to demeaning labour and a resurgence of voluntary work and cultural life? Is it affordable? This collection of short but compelling essays, all previously published in Social Europe, allows both proponents and opponents to make their case and is designed to extend this vital discussion to a wider audience. 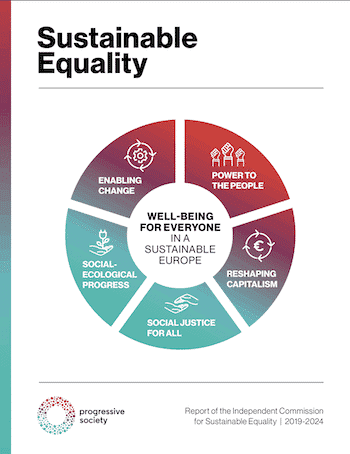 Sustainable Equality Report. Well-being for everyone in a sustainable Europe

Our societies are in the midst of political, economic, social and ecological crises, which permanently feed into each other, and already undermine democracy. Progressive politics with a common and strong vision are crucially needed. Ahead of the next European elections, the Sustainable Equality Report championed by the S&D Group through its Progressive Society initiative addresses this need, resulting in more than 100 concrete policy proposals by thirty policy-makers and renowned experts.

Corporate income tax in the EU, the Common Consolidated Corporate Tax Base (CCCTB) and beyond: is it the right way to go?

This working paper reviews key elements of the debate around the Commission’s proposals to tackle the problem of low effective tax rates for multi-national companies by instituting a Common Corporate Tax Base (CCTB). The paper begins with a non-technical discussion of the main issues, including earlier OECD and G20 proposals, and their implications for European tax policy. It then discusses the relevance of the CCTB proposal and considers to what extent it could provide a comprehensive solution for the main issues at stake. 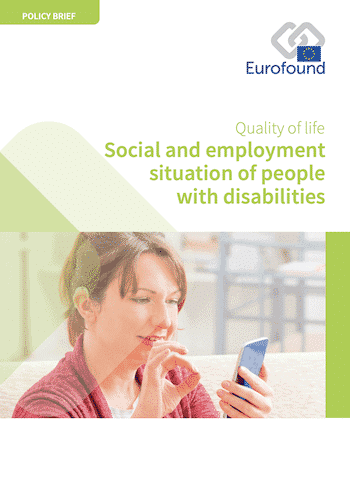 Social and employment situation of people with disabilities

People with disabilities are among the most disadvantaged groups in the EU. This policy brief examines the social situation of people of working age with disabilities, using data from the 2011 and 2016 rounds of the European Quality of Life Survey (EQLS). The brief looks at changes over this period in employment, education and training, participation in society, social protection and healthcare, all priority areas of the European Disability Strategy. 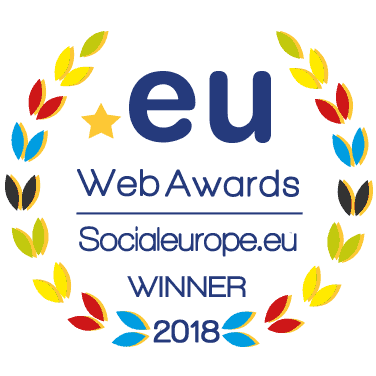